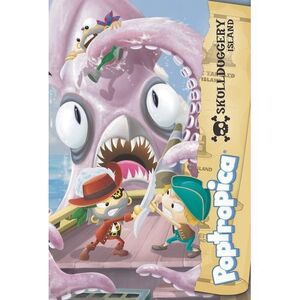 Along with the Astro-Knights Island (Book), The Skullduggery Island (Book) is another paperback storybook for Poptropica's longest islands. The book was written by Adrianne Ambrose and was released on November 8, 2012. It also comes with a Skull Pirate promotion code (SKULLBOOK). Read the first two chapters here.

All aboard for an adventure along the high seas! An evil pirate named Captain Crawfish has been raiding the small port town of Fort Ridley. Having just returned to town, young Owen Christopher must lead a ragtag crew on a daring journey through many dangerous ports to recover a long hidden treasure that might just be the only hope in defeating Captain Crawfish.