In the story, your poptropican finds a golden apple. Unfortunately, Zeus suddenly appears, angry at the player for attempting to take the apple of immortality. The player apologizes quickly; Zeus says he will grant them immortality, but they have to perform a series of tasks for him or all of Poptropica will be in danger.

After gathering all five objects for Zeus, the player asks for immortality. Zeus then laughs, saying how he was lying the whole time and would wield the five sacred items to rule all of poptropica. With the help of Poseidon, Hades, Athena and Hercules, your poptropican battles Zeus atop Mount Olympus and you reclaim the five items. Poptropica is saved! 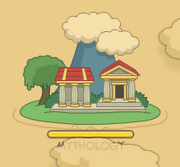 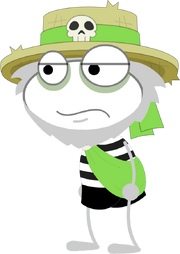 Charon, the ferryman of the Underworld.

The Common Room on Mythology Island is the Midas' Gym. 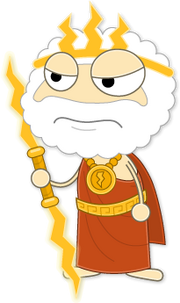 Zeus, the God Of The Sky and Thunder. He's the main antagonist in the island.

The Hydra, whom's whiskers you need for one of the sacred items.