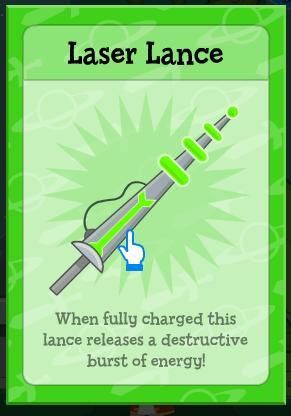 The Laser Lance is one of the mystical weapons of Arturus.

The Laser Lance is used to defeat the Mother Phoenix boss in the Jungle Planet. You'll have to fight your way through Bee-Drones and the phoenix's missiles. Also dodging lightning from black clouds. Overcharge your laser lance before the phoenix attacks. (it gets harder the more time you successfully damage it). It is later stolen by the Binary Bard and turned into the Green Fuel Orb along with the Ice Arrow and Force Shield.