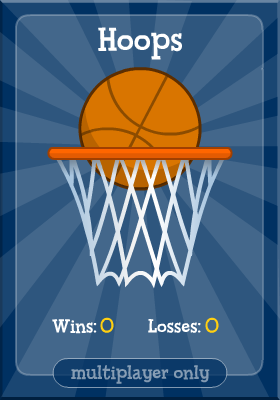 Hoops is a simple head-to-head game in which you attempt to score five baskets in a game of basketball before your opponent does. You have the ability to play this game against other players in Common Rooms.

You can control the angle and power of each shot with your mouse cursor, and the goal is to aim it just right so that you score a basket. You shoot the ball by clicking on the mouse.

After a successful basket is scored by either player, the hoop will move up or down, often requiring you to change the angle and power of your shot. When one player scores five baskets, the game is over.