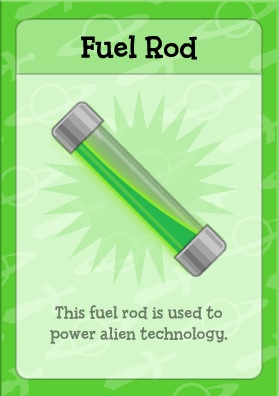 Green Fuel is a power source and an item in Astro-Knights Island that can power the Excalibur.

You find it in the castle dungeons. To get it, first enter the dungeon and unlock the secret passage with the lever.Then go to Mordred's hideout and enter through the tunnel. The Invader Bot will explode, hurling the green fuel rod through the bars and out of reach. Then get Merlin to go pick up the Green Fuel. Then you have to take it to the Excalibur. Later Mordred fuses the Laser Lance, the Force Shield and the Ice Arrow to form the Green Fuel Orb, which would later be used to power his robot and subsequently, the Kingdom of Arturus.