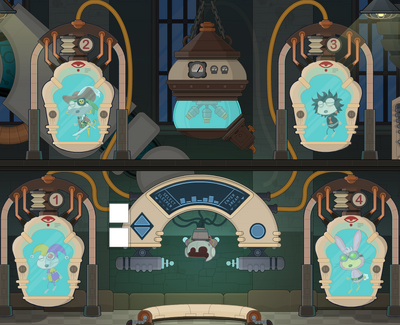 The Dream Machine is the machine on Super Villain Island. You have to use to get into the villain's minds to extract their totems, representing their evil. It was invented by Dr. Jupiter (Zeus), who is later trapped in it.

The Dream Machine appears as a large machine with four containment units, each with tubes connecting it to a large horseshoe-shaped control panel with a screen displaying the name of the victim, two buttons to change the victim and a button to activate it. There is also a helmet and two laser-like machines attached to it.

The Dream Machine is used to trap it's victim's in a state of suspended animation, allowing another person to select the victim of choice, and enter his/her dream.