The Booga Bay fisherman is a fisherman on Shark Tooth Island.

You can find the Booga Bay fisherman on Booga Bay on the island with the cannon. He tells you that the Great Booga Shark is angry and destroying their fishing boats. He also tells you that he tore off a page from Professor Hammerhead's journal and sold it to an archeologist. Once you have put the shark to sleep, he will thank you and say that the fishing industry is back in business.

In March of 2009, Poptropica held a character popularity contest on the Poptropica Creators' Blog. In the third poll hosted for this contest[1] (the theme of this poll being miscellaneous characters), the Booga Bay fisherman appears. Strangely, he appears with gray hair (in the island quest, he has blonde hair). However, this may be explained by the spy character next to him who uses the similar hair and beard assets, as well as hair color. 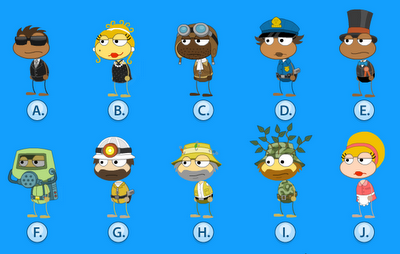